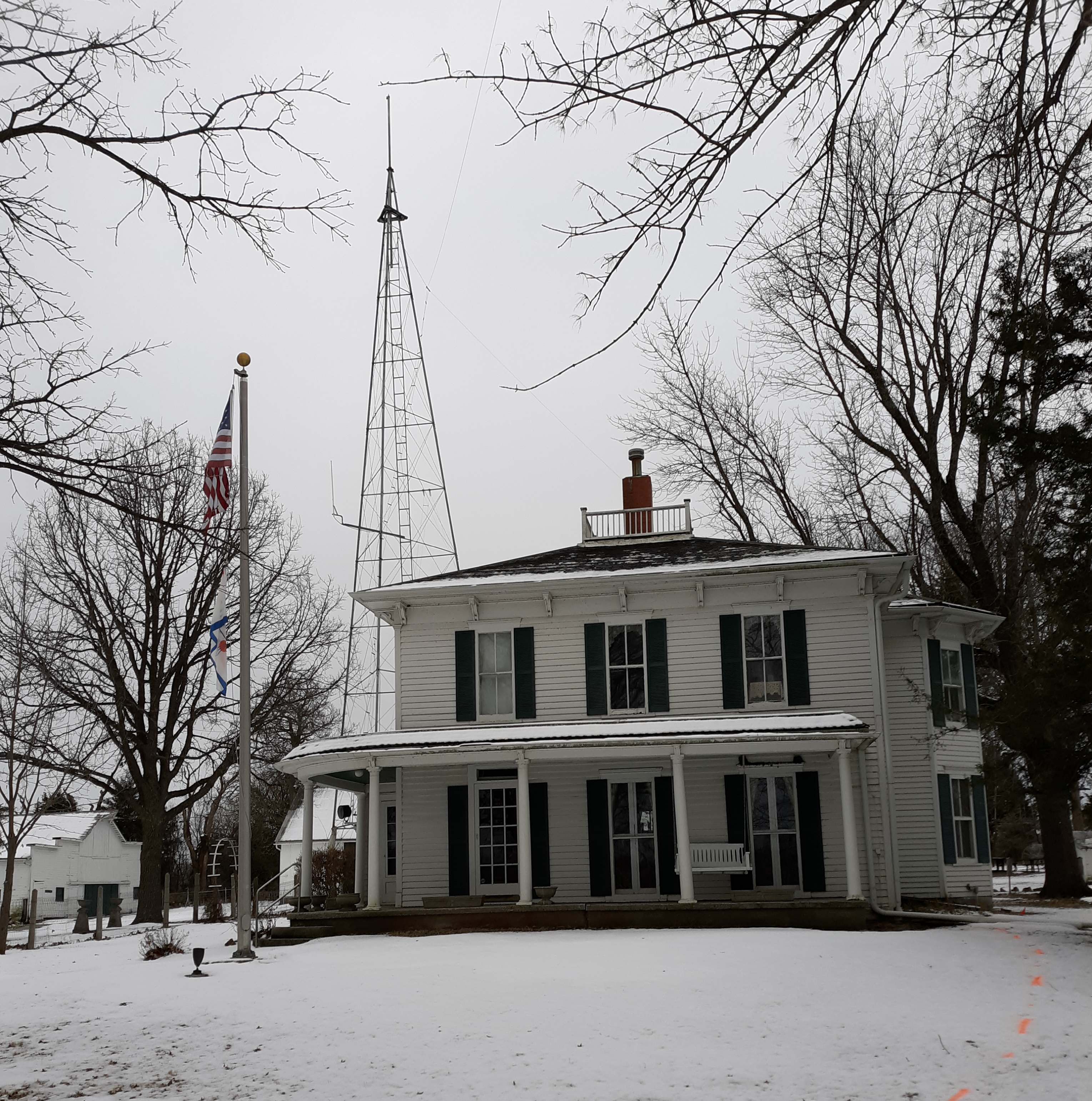 “Marshall Ensor has a new loud sounding horn which when attached to his radio the Kansas City concerts can be heard for over half a mile away.”

We know from this little item that appeared in the Nov. 23, 1922, issue of The Olathe Mirror that Marshall Ensor, W9BSP, probably had a peripheral interest in music at the very least, which begs the question: what sort of music might he have listened to when the farm chores were done and the next day's lessons at Olathe High School had been planned? Was he into jazz and the up-tempo music of the Roaring '20s? Could he have enjoyed hearing African American men with guitars and deep voices sing the blues again and again during the Great Depression? Or did he prefer classical music ... Bach's Toccata and Fugue in D minor, Beethoven's Fifth Symphony, or perhaps Tschaikowsky's First Symphony, which was written in 1866 and carried the subtitle "Winter Dreams"?

In the photograph that accompanies this story, the familiar Ensor home at 18995 W. 183rd Street is pictured as one would see it in looking to the south from the street. The photograph was taken Feb. 15, three days after a few inches of snow fell in these parts just ahead of an arctic blast from Canada that sent the temperature down into the single digits for a day or so.

We also know from the website www.ensorparkandmuseum.org and from this little item that appeared in, of all papers, The Council Grove Republican, on Nov. 21, 1941, that Marshall had some time on his hands in the early 1940s for dreaming, thinking and planning because he was laid up and couldn't work, either on the farm or at the school.

"Marshall Ensor, an Olathe high school teacher, fell 22 feet from the gym ceiling this week fracturing his pelvis and receiving a skull fracture." This accident, which happened just after Marshall had installed a new antenna for the amateur radio station at the school (W9UA), sidelined him for eight weeks. And he wasn't even a month into his recovery when the Japanese bombed Pearl Harbor, pulling the United States into World War II and bringing all amateur radio activity from coast to coast to a sudden halt.

As he lay there in bed or reclined in a fairly comfortable chair waiting for his 42-year-old body to slowly heal from the damage that had been done to it by the gym floor, what were Marshall's "winter dreams," if you will? Because I imagine he had a few of them. A quick end to the war and a return to "normal," which would have meant the resumption of his popular teaching radio by radio lessons? The establishment of an amateur radio station at every high school in Kansas? The discovery of a cure for polio, the disease that had afflicted his father the final years of his life? A remodeled kitchen at the home place for his younger sister Loretta to enjoy, making life on the farm a little bit easier for her? A well-earned summertime road trip to Maryland with his wife, Ina, to visit some of his kin there?

Perhaps it was at this point in his life that Marshall began pondering the idea of ultimately turning the family farm with its assorted outbuildings and a distinctive two-story house at the center of it all into an inviting place where folks from miles around could come to experience what life was like on a Kansas farm in the early 1900s and to learn about the work he and his sister had done in the field of amateur radio as pioneers in the field. "Ensor Park and Museum … now that might do … I'll have to run that by Loretta sometime and see what she thinks," I can easily envision him saying to himself as he contemplated the future.

Well, enough of the past, fast forward to the present. So when there was snow on the ground a couple of months ago, the wind was blowing hard out of the north and the mercury was still headed south at two o'clock in the afternoon, what were your "winter dreams," if you will? Restoring that Viking II you inherited from your uncle? Doubling the size of your shack if your XYL will let you? Coming across a rare photo of your great-grandmother on the Internet, the great-grandmother you've heard so much about and have always wondered what she looked like? Finally getting down to Arizona after all these years to catch a Royals spring training game? Or here's one to consider: eventually finding a good home for all those records you used to play on something called a turntable that was connected to a pair of spiffy-looking speakers to achieve that stereo effect?

Beatles. Stones. Yardbirds. Kinks. Maybe even The Mamas and The Papas and their rendition of "Dream a Little Dream of Me" … what are you asking?