By George, McCarville and Peters Held Up The CW End of Annual QSO Party 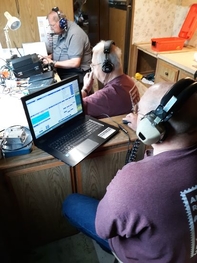 They didn't party like it was 1999, but members of the Santa Fe Trail Amateur Radio Club still managed to have some fun over the weekend of August 24 and 25 in Edgerton and Overland Park, too, during the 2019 Kansas QSO Party.

In Edgerton, seated inside a vintage camper parked on a piece of property owned by club member Del Sawyer, K0DDS, members of the club made an effort to contact as many other hams as possible that Saturday and Sunday in participating in what has become an annual special event to make sure Kansas is "on the air."

Using the club call sign of KS0KS, they worked in pairs as much as possible at the three voice stations in operation, one regularly calling out "CQ, CQ. Kansas QSO Party. CQ, CQ." into the headset microphone while the other focused on the computer keyboard and screen nearby, ready to log the necessary information about the ham on the other end of the proverbial line once he or she had been contacted.

Meanwhile, in Overland Park, club members George McCarville, pictured here on the left, WB0CNK, and Marty Peters, KE0PEZ, manned a continuous wave (CW) station at George's home in the quest to make additional contacts through Morse code. "It was great fun, especially for me as I tried to hone my timing on the keyer paddles," Marty reported afterward. "I changed S's to H's and B's to 6's, and I sent a lot of other non-defined weird characters. But it was all good, and it was great experience. It was a pleasure working together with George." 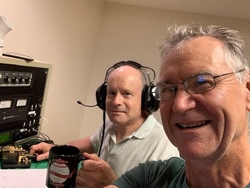 All in all, according to Marty, roughly 50 contacts were made, mostly on 40 meters but with "a handful" on 20 meters.

Anyone contacting KS0KS either day on either band in play (20 or 40 meters) or through either mode (voice or CW) earned 100 bonus points in the competition for plaques and certificates. That's because the Santa Fe Trail Amateur Radio Club was instrumental in organizing the first Kansas QSO Party more than a decade ago and has been involved in the event ever since.

The activity that took place that Saturday at Sawyer Memorial Antenna Park in Edgerton included the serving of a catered lunch prepared by Tony Johnson, KD0KLD, consisting of brisket, baked beans and potato salad, with soft drinks available to 'wash' everything down with. And in the evening, pizza was delivered to the camper (not by Tony) for all present to enjoy.

Between the 12-hour operating 'window' that Saturday (9 a.m. to 9 p.m.) and the six-hour 'window' that Sunday (9 a.m. to 3 p.m.), club members registered approximately 320 voice and CW contacts altogether during the party. Locations reached over the airways included Slovakia, Canada, Hawaii and North Dakota.

"It went great once we got the band conditions," Del reported afterward. "It was a lot of fun." He went on to say that the two-day event gave him and other club members a chance to "try out" the antenna park, which "worked great," according to him.